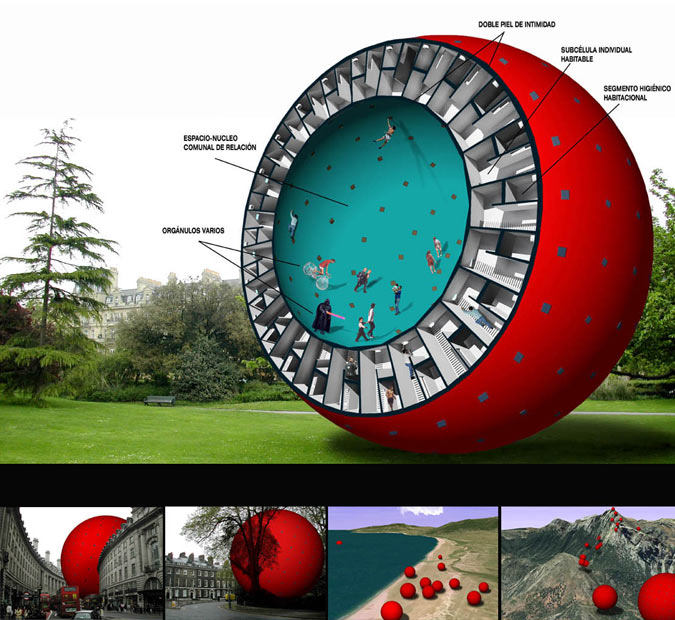 ANARCHITECTURE is one of those underground artistic movements that hardly persists in memory but that constitutes the fertilizer needed to allow other more rigorous cultural phenomena take root. During three months in 1978, a group of four architecture students in London did more than three hundred activities applying the PUNK spirit to this discipline (edition of alternative publications, street interventions, projects, and all kinds of manifestations). With their provoking attitude towards values as basic as history, aesthetics, solidity, function and even health, they gave us a new point of view that illuminates our own perception of the artistic context. The small impact their interventions made, and the ephemeral condition of their proposal brought about the almost complete disappearance of all the documentation on them. José Luis Agreda and Hombre de Piedra are the researchers that brought to light the history of these revolutionary characters. In the summer of 2004 they participated in the Exhibition “lntrusions: Art, Architecture and Urbanism in the Cities to Come,” organized by the Andalusian Center of Contemporary Art, where they made known, for the first time in Spain, the ideas and the works of these architects. The interest awoken was big, both because their radical criticism, now in fashion, and their being completely unknown to the cultural gurus. Maybe this makes clear the induced partiality of our knowledge of the artistic reality. Now, as a result of this timely rediscovery, Anarchitects are appearing in architectural journals. Maybe they wouldn’t have liked that.